Mars requires less energy per unit mass (delta-V) to reach from Earth than any planet except Venus. Using a Hohmann transfer orbit, a trip to Mars requires approximately nine months in space. Modified transfer trajectories that cut the travel time down to four to seven months in space are possible with incrementally higher amounts of energy and fuel compared to a Hohmann transfer orbit, and are in standard use for robotic Mars missions. Shortening the travel time below about six months requires higher delta-v and an increasing amount of fuel, and is difficult with chemical rockets. It could be feasible with advanced spacecraft propulsion technologies, some of which have already been tested to varying levels, such as Variable Specific Impulse Magnetoplasma Rocket, and nuclear rockets. In the former case, a trip time of forty days could be attainable, and in the latter, a trip time down to about two weeks. In 2016, a University of California, Santa Barbara scientist said they could further reduce travel time for a small robotic probe to Mars down to "as little as 72 hours" with the use of a laser propelled sail (directed photonic propulsion) system instead of the fuel-based rocket propulsion system.

During the journey the astronauts would be subject to radiation, which would require a means to protect them. Cosmic radiation and solar wind cause DNA damage, which increases the risk of cancer significantly. The effect of long-term travel in interplanetary space is unknown, but scientists estimate an added risk of between 1% and 19% (one estimate is 3.4%) for males to die of cancer because of the radiation during the journey to Mars and back to Earth. For females the probability is higher due to generally larger glandular tissues. 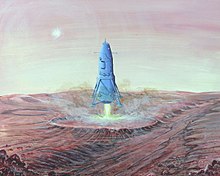 Mars has a surface gravity 0.38 times that of Earth, and the density of its atmosphere is about 0.6% of that on Earth. The relatively strong gravity and the presence of aerodynamic effects make it difficult to land heavy, crewed spacecraft with thrusters only, as was done with the Apollo Moon landings, yet the atmosphere is too thin for aerodynamic effects to be of much help in aerobraking and landing a large vehicle. Landing piloted missions on Mars would require braking and landing systems different from anything used to land crewed spacecraft on the Moon or robotic missions on Mars.

If one assumes carbon nanotube construction material will be available with a strength of 130 GPa (19,000,000 psi) then a space elevator could be built to land people and material on Mars. A space elevator on Phobos (a Martian moon) has also been proposed.